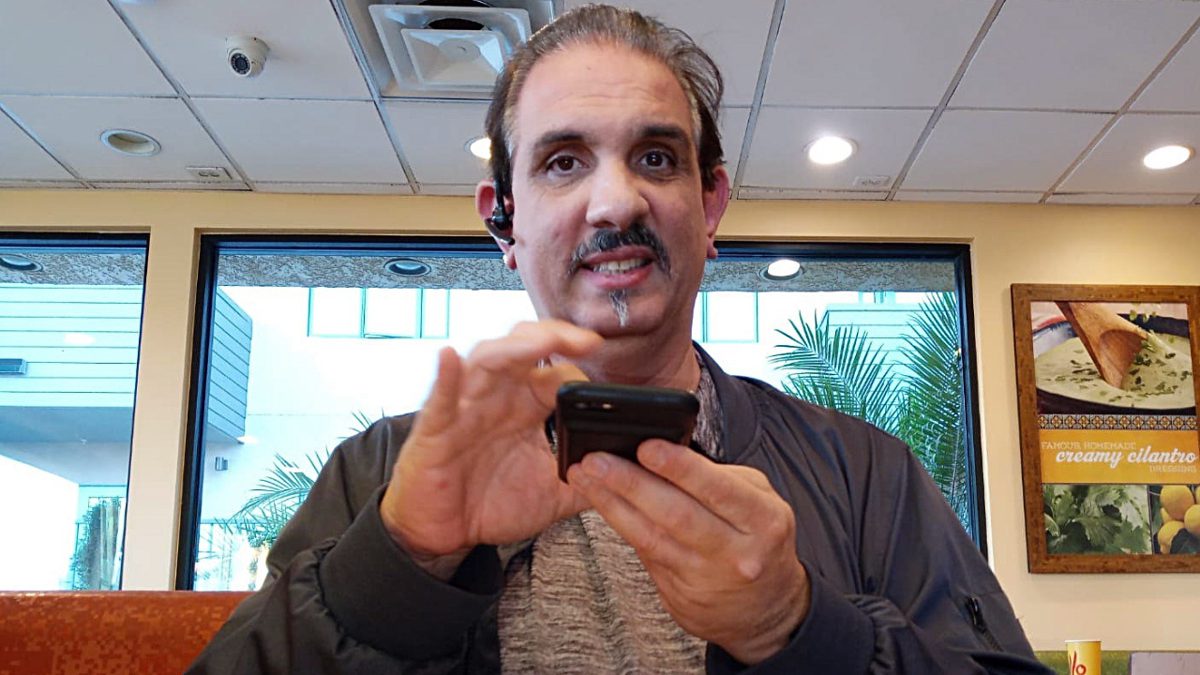 By Cynthia R. Laws Last updated Feb 9, 2022
Share
Assistive Technology Conference hosted by California State University, Northridge (CSUN). The CSUN gathering, which offers equipment and software to help the blind, deaf and other disabled people, has been called the “CES of assistive technology”. In 2009, after the conference venue moved south to San Diego, a mini version of the gathering called Best In Tech began in the San Fernando Valley. At the last time Vargas spoke, nearly 500 people attended.

Another way Vargas kept abreast of technological developments was to listen to radio and cable TV shows focusing on the subject, especially “The Tech Guy”, the weekend call-in show airing nationwide from influential Southern California news/talk station KFI-AM. In 2004, a new host named Léo Laporte took over the show. Over the years, Vargas went from being one of the listeners calling for help to someone Laporte considered an authority on accessibility, who would help answer questions from blind listeners struggling with their computers and their mobile devices. Radio has long been an important source of information for blind people, and Laporte has noticed that he receives many calls from blind listeners or family members calling on their behalf.

Vargas recalls calling the show when he got his Nokia 6620 and how Laporte was genuinely interested in knowing what it was like to use it for a blind person. The radio host then allowed Vargas to promote the Best In Tech rally on the airwaves. Eventually, Laporte encouraged Vargas to give up his phone number, email address, and website (www.techjv.com).

“Leo doesn’t shy away from taking calls from blind listeners,” said Vargas, who also listens to Laporte’s tech podcast network, TWIT.tv. “He accepts people like me being involved in the show.”

Laporte said he could feel the frustration of his blind listeners when they called The Tech Guy. He tries to imagine the challenge of using a smartphone or computer – or living without them – in this modern world.

“As a sighted user, my experience of accessibility technology will never be the same as someone who can’t see what’s going on,” Laporte explained. “I understand how difficult it is and I want to help, but I can’t really represent that audience, so it’s really important that the people helping blind people with accessibility are blind themselves, because only they can really understand the problems.”

Both Laporte and Vargas have widely adopted smart speakers in the home. While Vargas has several flavors of the Amazon Echo and a Google Home in his house, Laporte has Amazon, Google and Apple smart speakers in virtually every room of his house. But as far as Laporte was concerned, the voice-enabled devices fell short of his expectations of what he thought would be transformational technology.

“I don’t think Siri or Amazon’s Echo or Google Assistant are as good as they could or should be,” Laporte said. “And they’re not improving at the rate I thought they could.”

In addition to calling on “The Tech Guy” radio show and giving live tech presentations to groups of blind people, Vargas spread the word on podcasts. He was co-host of a podcast called “All About Smartphones”, available on the website of the Audio Internet Reading Service of Los Angeles (AIRSLA), a group he founded in 2012 to discuss everything from high tech to no tech used to meet in person until the pandemic. Since March 2021, Breaking Blindness Barriers has been gathering on Zoom and AIRSLA is turning its meetings into a podcast.

Smart speakers are one of the things Vargas is helping blind customers learn to use. So is GPS. He taught longtime customer Bob Acosta how to follow travel directions spoken aloud on his iPhone as he walked around the block with him.

Acosta is a retired history teacher in Chatsworth, California who was blind from birth. He paid Vargas for dozens of two-hour sessions to meet his own technology needs and those of his wife Ruth Ann, who is also blind. Now 82, Acosta uses his iPhone to listen to text messages and audiobooks, as well as stream matches of his favorite sports teams. And thanks to Vargas, he learned to pair his hearing aids with his phone.

Acosta got his first iPhone in 2013, but first gave up trying to master the device and then gave it to his grandson.

“I don’t think a blind person can learn that,” he said at the time.

But then a blind friend introduced him to Vargas, who said, “You can do it.”

Acosta records the lessons with Vargas so he can review the material, if he needs to brush up. He said he likes that Vargas never tells him that using technology is easy and there are no dumb questions during workouts.

Acosta can call Vargas for remote counseling, which is free for clients who pay for the lessons. Sometimes a customer who pays for a single lesson will behave as if there are unlimited follow-up calls afterwards. It doesn’t work that way.

“People think they can call you at 2 a.m.,” complained Vargas.

Acosta had been blind all his life when he started working with Vargas. But most of Vargas’ clients are newly blind and struggle with depression and bitterness. Requests for help have slowed during the pandemic, in part due to the need to do the first in-person training. Vargas says that once a blind person has mastered the basics of using a smartphone, they can complete subsequent sessions remotely.

“I don’t want to make people dependent on me,” Vargas said. “I tell people from the start that my goal is to make sure I don’t hear from them after a while.”